Explore a short hike from the center of the ADKX campus to a “gem in the wilderness.” A trail to Minnow Pond dates back to the site’s early history as a hotel.

What to Bring: Proper footwear for a hike like sneakers or boots, appropriate clothing, water and snacks if desired.

Registration required for this hike. Directions and more information will be sent after registration. Click HERE to register
$3 for ADKX Members; $5 for general public.

Ed Kanze is a 1978 graduate of Middlebury College. He earned a B.A. in Geography and won the Bermas Prize for highest departmental honors. He lives with his wife and two children on 18 acres along the Saranac River.

In April 2005, at the American Museum of Natural History in New York, Ed’s essay about the passenger pigeon, “In Search Of Something Lost,” was named by the John Burroughs Association as the Outstanding Published Natural History Essay of 2004.  The same essay earned a gold medal in environmental writing from the International Regional Magazine Association. PBS featured Ed and his nature writing in the documentary, “The Adirondacks.”  His essays and articles have appeared in Adirondack Life, Audubon, Birder’s World, The Conservationist, Utne Reader, and many more.

Ed has published five books. His most recent, Over The Mountain And Home Again: Journeys Of An Adirondack Naturalist brings together stories of nature and adventure in New York State’s Adirondack Park, the largest park in the Lower 48. 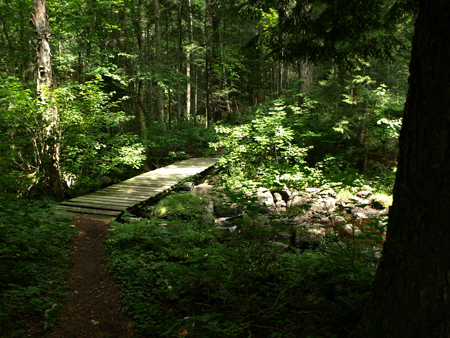 Thursday, July 14 This exquisite, relaxed backwoods ramble, not far from the village of Raquette Lake, will bring us through...

Thursday, July 21 Explore a short hike from the center of the ADKX campus to a “gem in the wilderness.” A trail...