Harold K. Hochschild and His Legacy

History is powerful. History can capture the imagination and inspire great events – including the founding of a regional history museum. Although many would play a role in creating the institution we now call the Adirondack Experience, it was the vision, dedication, and benevolence of one man – Harold K. Hochschild – that brought this museum into being.

From the time he was a child, Harold spent summers with his parents and brother at Eagle Nest on Blue Mountain Lake. At that time, 1904, a railroad-steamboat network built by developer William West Durant was still the principal means for getting to the region.

Twelve-year-old Harold Hochschild was captivated by the train and steamboats, especially the Marion River Carry Railroad – the shortest standard-gauge line in the world. A mere 1,300 yards in length, the rail line connected Raquette Lake to Utowana and Blue Mountain Lakes. Hoping for a chance to handle the throttle on the passenger train’s H. K. Porter Engine, Harold cultivated a friendship with Rassie Scarritt – it would be the first of many relationships he fostered with the hardworking locals who populated the remote Adirondack landscape.

Harold’s summers in Eagle Nest sparked a lifelong interest in the Adirondacks, and early on he began collecting information about the region. He amassed boxes of research materials, letters, Photostats, typescripts, and notebooks containing his penciled notes. His folders, ranging from “Adirondack Iron Works” to “Wild Animals,” are organized by subject in alphabetical order.

As an adult, Harold served in World War II and became an executive in his father’s metals firm – American Metal Company – all the while continuing to passionately pursue his interest in Adirondack history. Working nights and weekends, Harold gathered material for an extensive history of the region, interviewing as many “old timers” as possible. When Township 34 appeared in 1952, it contained 614 quarto-sized pages, 470 illustrations, 39 maps, 24 appendices, a bibliography, index, and weighed seven pounds without its slipcover. 600 copies were printed.

At this same time, hotelier William Wessels, who owned the Blue Mountain House summer resort above Blue Mountain Lake, proposed transforming his property into a museum dedicated to Adirondack history. He and like-minded individuals, Hochschild included, formed the Adirondack Historical Association and began planning a museum to capture and share the history of the region. The Adirondack Museum – now the Adirondack Experience – opened to the public on August 4, 1957. Among the artifacts on display is the very same H. K. Porter Engine from the Marion River Carry Railroad that so fascinated Harold as a boy.

In his retirement, Harold Hochschild continued to be an active philanthropist and influential force for change in the Adirondack region. In addition to his work at the museum, he served as chairman of Governor Nelson A. Rockefeller’s study on development in the Adirondacks, which would eventually produce the Adirondack Park Agency. He died in 1981, leaving behind him a legacy of historical and environmental preservation.

The Award may be given to organizations as well as individuals. Although residency within the Park is not required, the Award is presented in recognition of achievement or service having an obvious connection to or impact on the Adirondack region. The recipient of the Award receives an original copy of Hochschild’s authoritative tome, Township 34, and is honored at the Adirondack Experience’s Benefit Gala in the summer.

Past Recipients of the Harold K. Hochschild Award 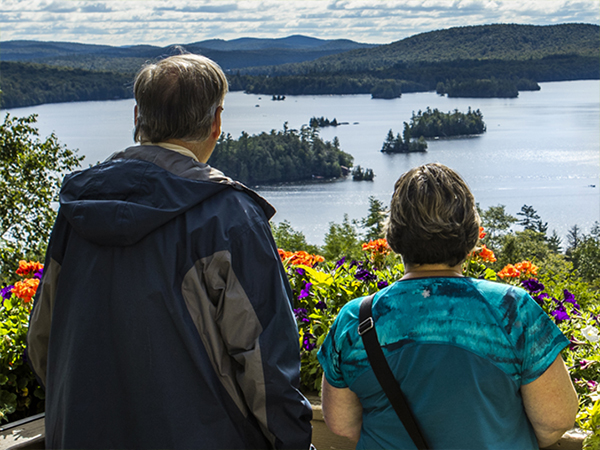